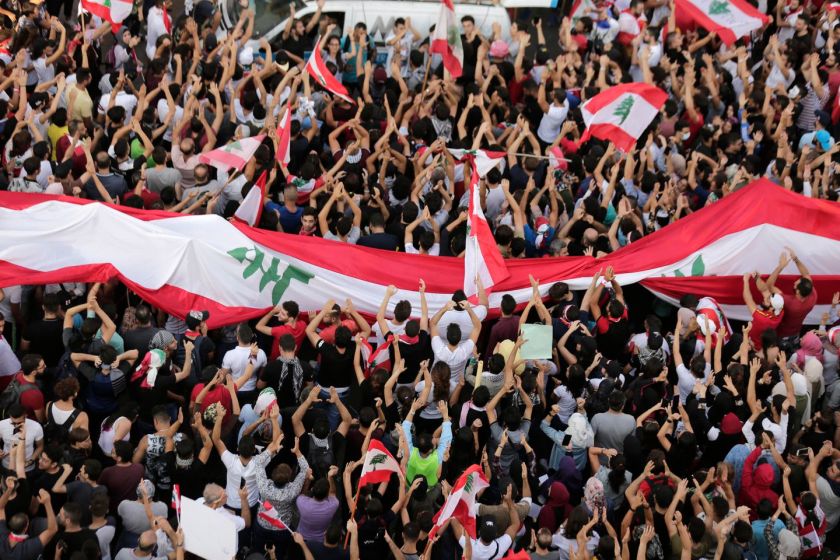 In Talk of the Nation (2011), Simon Schama, a professor of History and Art History in Columbia University, couldn’t have said it any better: “If you are too carnival-like, and you actually don’t redirect and harness all that popular energy strategically against the institutions of power, you end up, actually, sitting in your own prison. It looks like a carnival, but actually, life goes on around you, and you become a kind of museum of failed revolutionary energy.” Some are referring to the Lebanese Revolution as the biggest revolution the Middle East has ever seen. Let’s be realistic here and look at the facts. What we are witnessing in Lebanon is definitely a phenomenon the Lebanese people has not seen before, but this uprising despite its new record in scale is not a revolution.

What does it take to have a successful revolution? First, let’s define the term revolution. The classical definition in any English dictionary is the overthrow of a regime to replace it with a new one (Oxford). Second, we should understand the components of a revolution. History has recorded many uprisings of peoples against their ruling class, but not all uprisings are revolutions. Among the most famous revolutions in history are the French, Russian and Iranian revolutions in 1792, 1917 and 1979 respectively. The conditions that produced the three mentioned revolutions are very similar. They set the baseline for having a successful revolution. In her book State and Social Revolutions, Theda Skocpol (1979) argued that the conditions under which a revolution usually occurs include an extreme disconnect and ever growing gap between the social and the political, inefficient administration, crippled economy on the brink of bankruptcy and weak military capabilities.

In Lebanon, the people are expressing a sentiment of disconnection between the political elite and the citizens that took to the streets twelve days ago. The alarming lower voter turnouts one election after the other was ignored, when it was a clear sign of the increasing dissatisfaction of a growing portion of the Lebanese population towards the candidates running for office. The number of Lebanese citizens who do not identify with the ruling class has been growing for the last few decades. Another factor that produces a revolution is inefficient administration, where the elected government is too divided and consequently too slow in delivering solutions for reform and executing them. This tarnishes its credibility in governing the country. Also, it is no secret that Lebanon has feeble military capabilities. Lebanon ranks 118 out of 137 countries considered for the annual Global Fire Power (GFP) review that measures the power index (PwrIndx) by considering more than 55 individual factors.

Now that we have established that all three elements that create a fertile environment to spark a revolution are present, we can go back to ask the question: What makes a successful revolution? Revolutions require both a philosophy, and a clear understanding of the current system and tactics. The idea of a revolution cannot materialize without a clear course of action lead by a committee of educated citizens, who have sufficient pragmatic knowledge about the mechanisms of governance. Educated does not simply mean having a degree in some higher education, but a real knowledge in the functioning of the governmental engine. This knowledge will simply allow the many to zoom in and target specific gatekeepers to apply pressure on the current government in order to achieve the desired results. It will also allow the Lebanese people to transition from the current governmental structure to the new one in a more efficient way. In Lebanon, we see that the idea and the desire for a new regime is there, but no “intelligentsia” is leading the revolution strategically.

Lastly, in a revolution, the people must have a single unified voice. That is not what we are seeing in today’s protests. Less than 25% of the population, gathered to protest against the current government. Although some opportunists tried to ride the wave of the people’s uprising, anger and misfortune. However, what is clear is that the momentum of the Lebanese revolution is slowly but surely decelerating and the initial seemingly unified energy is now dispersing. Some citizens opposing the fall of the regime took the streets in the last couple of days of the so-called revolution to express their support for the current government. With that said, The Lebanese so called revolution is not a revolution. It is a spontaneous protest that has gained momentum and on the road to going rogue.

2 thoughts on “Lebanon’s Revolution is Not a Revolution”